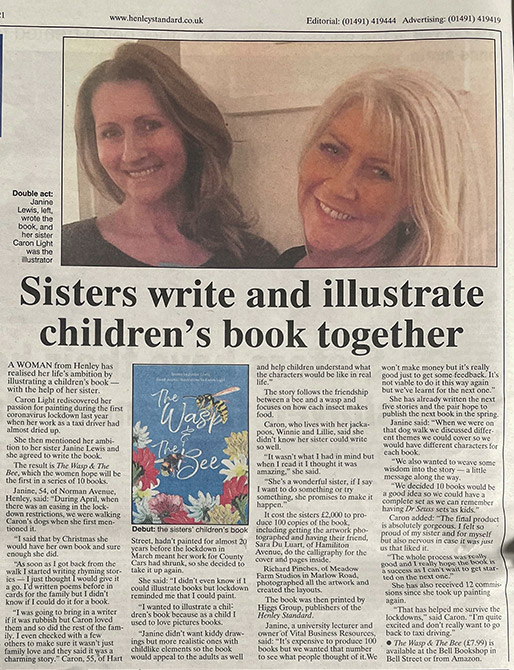 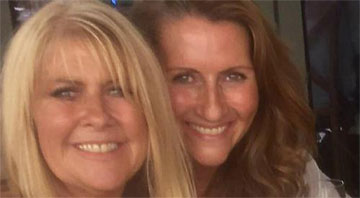 A WOMAN from Henley has realised her life's ambition by illustrating a children's book — with the help of her sister.

Caron Light rediscovered her passion for painting during the first coronavirus lockdown last year when her work as a taxi driver had almost dried up.

She then mentioned her ambition to her sister Janine Lewis and she agreed to write the book.

The result is The Wasp & The Bee, which the women hope will be the first in a series of 10 books.

Janine, 54, of Norman Avenue, Henley, said: "During April, when there was an easing in the lockdown restrictions, we were walking Caron's dogs when she first mentioned it.

"I said that by Christmas she would have her own book and sure enough she did.

"As soon as I got back from the walk I started writing rhyming stories — I just thought I would give it a go. I'd written poems before in cards for the family but I didn't know if I could do it for a book.

"I was going to bring in a writer if it was rubbish but Caron loved them and so did the rest of the family. I even checked with a few others to make sure it wasn't just family love and they said it was a charming story." Caron, 55, of Hart Street, hadn't painted for almost 20 years before the lockdown in March meant her work for County Cars had shrunk, so she decided to take it up again.

She said: "I didn't even know if I could illustrate books but lockdown reminded me that I could paint.

"I wanted to illustrate a children's book because as a child I used to love pictures books.

"Janine didn't want kiddy drawings but more realistic ones with childlike elements so the book would appeal to the adults as well and help children understand what the characters would be like in real life."

The story follows the friendship between a bee and a wasp and focuses on how each insect makes food.

Caron, who lives with her jackapoos, Winnie and Lillie, said she didn't know her sister could write so well.

"It wasn't what I had in mind but when I read it I thought it was amazing," she said.

"She's a wonderful sister, if I say I want to do something or try something, she promises to make it happen."

It cost the sisters £2,000 to produce 100 copies of the book, including getting the artwork photographed and having their friend, Sara Du Luart, of Hamiliton Avenue, do the calligraphy for the cover and pages inside.

Richard Pinches, of Meadow Farm Studios in Marlow Road, photographed all the artwork and created the layouts.

The book was then printed by Higgs Group, publishers of the Henley Standard.

Janine, a university lecturer and owner of Vital Business Resources, said: "It's expensive to produce 100 books but we wanted that number to see what people thought of it.We won't make money but it's really good just to get some feedback. It's not viable to do it this way again but we've learnt for the next one."

She has already written the next five stories and the pair hope to publish the next book in the spring.

Janine said: "When we were on that dog walk we discussed different themes we could cover so we would have different characters for each book.

"We also wanted to weave some wisdom into the story — a little message along the way.

"We decided 10 books would be a good idea so we could have a complete set as we can remember having Dr Seuss sets as kids."

Caron added: "The final product is absolutely gorgeous. I felt so proud of my sister and for myself but also nervous in case it was just us that liked it.

"The whole process was really good and I really hope the book is a success as I can't wait to get started on the next one."

She has also received 12 commissions since she took up painting again.

"That has helped me survive the lockdowns," said Caron. "I'm quite excited and don't really want to go back to taxi driving."

A delightful and entertaining children's book

Bought as a gift, the illustrations are super and the story rhyme compliments the images perfectly. Looking forward to the next book. Any age group could learn from the motto of this story.

A beautiful book bought for my granddaughter, lovely story , educational and beautifully illustrated by two talented sisters. I am very pleased with my purchase, and good value for money . I thank you very much from a delighted customer

I bought this book for my granddaughters, aged 6 and 4. They loved it. The only problem is that they both want to read it at the same time and that leads to predictable scenes of shouting and counter-shouting their prior claims. The story is beautifully complemented with some great eye-capturing illustrations.

I bought this book for my 2 nieces, to share, but that didn't happen!! A real treat for little ones, they will always remember the colourful illustrations and words, beautifully presented by these two talented sisters, a special keepsake for your children.